Billabong Droughtmaster and Brahman Studa  are  a family operation run by John and Catherine and Anna Hicks based at ‘Billabong’ near Moura in Central Queensland, Australia. The property has been home to the Hicks family for 60 years. When the family partnership was dissolved Billabong Droughtmaster Stud was formed from a selection of Alanray Stud Cows. While selecting for structural soundness, quiet temperament, short coats for tick resistance and fertility our herd was ever on the increase to a point when we were travelling to sales at Clermont, Longreach, Charters Towers, Roma, Springsure and Rockhampton every year selling bulls. The decision was made to hold an annual on-property sale at Billabong  and after constructing a sale complex , in September 1998 we held our inaugural sale. With many highlights  and achievements, one standout was  the 2010 sale where Billabong Toshi sold for a record for us of $60,000 selling to Glenfosslyn Droughtmaster Stud and The Talgai Droughtmaster stud. Toshi was the top selling bull of any breed sold at auction that year.

After 18 years of selling at our own sale we made the decision to return to the National Droughtmaster Sale ring in 2015, having sold there for over 20 years previous to having our own sale  and have now been selling there for the past 5 years. 2019 saw Billabong Hendrix sell for $100,000 topping the National Sale when he sold to Cashmere and Mungalla  Droughtmasters (pictured). We also take a line of stud heifers down to the National Droughtmaster female sale at Gympie in March of each year, as well we have paddock bulls for sale and  lines of  commercial heifers.

While our stud herds are run at home and nearby our commercial herds are run separately but are still required to meet our standards of good quiet temperament, structural soundness and ease of calving in our cows.

The first Brahman bull used at Alanray/Billabong was by Wairuna Tom and he was mated to red Shorthorn Cows from Natal Downs in 1959/1960. Some early sires were used from Avondale and Mimosa. About the same time a draft of both red and grey cows were purchased from Ossie Clark, Allawah, Banana. Females also came from Banyak Suka, Tartrus and Cherokee Studs.

Until a few years ago we continued to run both red and grey brahman herds but then sold our entire herd of grey cows to a single breeder and have concentrated on our red herd since.

We sell our Brahman bulls through the annual Brahman Week sale in Rockhampton Brahman Sale in October/November every year. Throughout the year we have both stud and commercial bulls and females for sale.

At Billabong our motto has always been Excellence and Satisfaction.

We select our Brahmans for their structural soundness, quiet temperament, and fertility.

Some images from the past 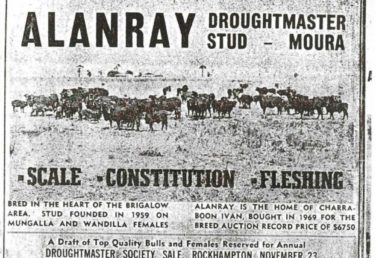 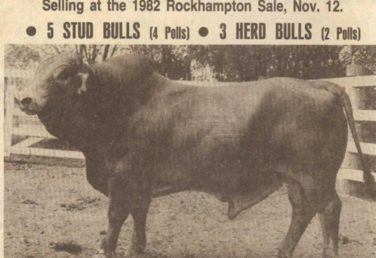 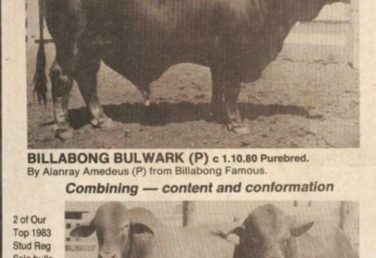 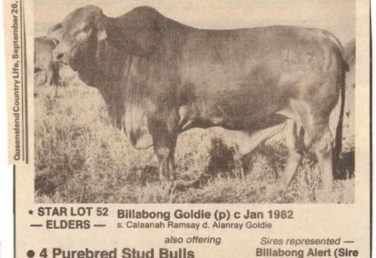 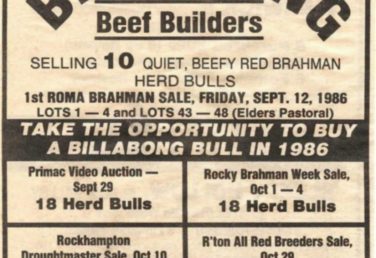 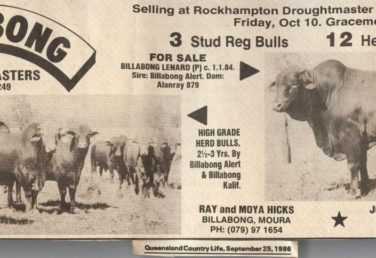 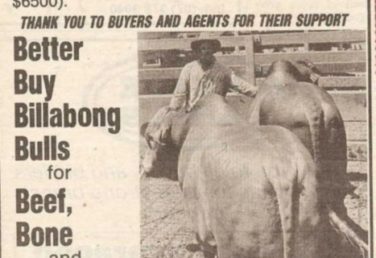 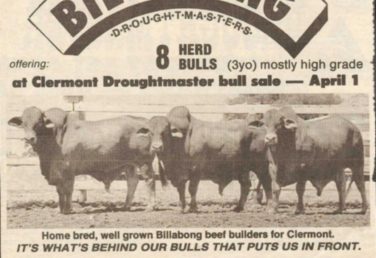 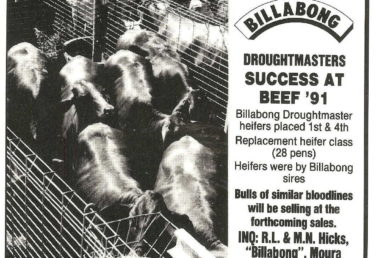