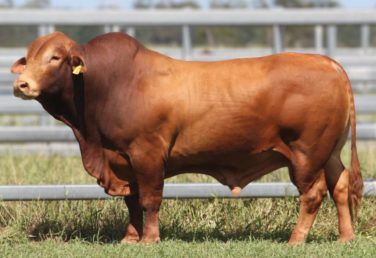 The top priced bull at Vitwood Studs’ Inaugural Sale, Jasper is a son of Billabong Norwood, who was purchased for $30,000 at our 2005 sale by the Torrisi family. Jasper was purchased for his sireline, which we think a lot of and for his dam breeding which we have not previously used in our herd. Jasper is an extremely tidy, polled very well muscled meaty type bull. We have found his progeny to be very tidy line choosing 3 sons for our 2011 show team including Billabong Whiskey who won the Calf Champion Bull title at the Droughtmaster feature show in Roma. Jaspers first progeny will be offered at the 2011 Billabong Bull Sale.